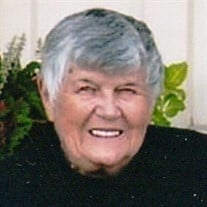 With much love and fondness, we honor our beloved mother, grandmother, and great-grandmother, Barbara Deming Gardner, who passed away in South Jordan, Utah, on April 6, 2022, at age 96. Barbara was born in Murray, Utah, on October 22, 1925, to Wayne and Melba (Whitmore) Deming. She attended Jordan High School and married her high school sweetheart, Edwin Ford Gardner, in American Fork on August 19, 1949, after waiting for him to return from the war. A passionate and well-respected teacher, Barbara graduated with a bachelor’s degree in education from the University of Utah and later earned a master’s degree in gifted and talented education from Utah State University. Mrs. Gardner taught for over thirty years at South Jordan, West Jordan, Westvale, and Jordan Ridge Elementary Schools, where she was known for her creativity in the classroom and her love for her students. Barbara loved to travel and frequently visited New York City to see Broadway plays and take in the museums. She travelled to the Utah Shakespeare Festival in Cedar City every summer, seeing as many plays as she could. One of her last big trips that she took with her best friends and cousins Charlene and Kathleen was to explore Ireland. She enjoyed hosting lively, rambunctious game nights with friends and family, where there would be much laughing and cheering over Rummikub, Mexican Train, and Hand and Foot. She kept summer gardens full of flowers and tomatoes. She loved meeting friends and grandkids for lunch dates, and she always had her nose in a good book. An active member of the Church of Jesus Christ of Latter-day Saints, Barbara served faithfully in many callings in the Primary and Relief Society organizations, where she blessed many lives along the way as a ward minister, teacher, leader, and friend. She served as her granddaughter’s temple escort in the South Jordan Temple near her home. Barbara is survived by her children, Vern (Kim) Gardner, Hollie (Nick) Gilliland, and Lori Gardner; her grandchildren, Emily (David) Grover, Amanda (Alin) Gilliland, and Will Gilliland; her great-grandchildren, Hollie Grover, Charles Grover, and Robin Grover. She is preceded in death by her husband, her parents, and her brother Mont. Memorial services will be held Saturday, April 16, 2022, at Goff Mortuary (8090 S. State Street, Midvale) with a viewing at 11:00 AM and funeral following at 12:00 PM. A viewing will also be held on Friday evening April 15, 2022, at Goff Mortuary from 6:00-8:00 PM. Interment will follow in the West Jordan Cemetery (7925 S. 1300 W., West Jordan). In lieu of flowers, you may donate to the Utah Shakespeare Festival in Barbara’s name at: https://www.bard.org/about/give/individual/ “We are such stuff as dreams are made on, and our little life is rounded with a sleep.” —William Shakespeare . . .

With much love and fondness, we honor our beloved mother, grandmother, and great-grandmother, Barbara Deming Gardner, who passed away in South Jordan, Utah, on April 6, 2022, at age 96. Barbara was born in Murray, Utah, on October 22, 1925,... View Obituary & Service Information

The family of Barbara Deming Gardner created this Life Tributes page to make it easy to share your memories.

With much love and fondness, we honor our beloved mother, grandmother,...

Send flowers to the Gardner family.