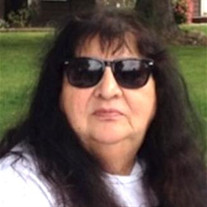 Bernice Lamb slipped away peacefully on April 14, 2022 in West Jordan, Utah. Born on May 8, 1949 to Verald and Florence Lamb, Bea was the youngest of seven children. Bernice grew up and lived in Midvale, Utah where she made many lifelong friends and memories until she moved to West Jordan, Utah where she continued to make memories and even more lifelong friends. Bea was a young mother who helped raise many children, big and small, throughout her life. It was not uncommon for Bea to have a full house whether they lived with her or were there for an afternoon. Bea loved fiercely and gave support to anybody that needed her. Blood didn’t mean anything; if Bea loved you, you were family. Bea met her sweetheart, Troy, when she was living in Midvale. Together, they built an incredible life full of love, fast cars, and weekly dinner dates with friends. You could often find Bea and Troy strolling through a car show or taking a chance in a casino. Bea loved to play the slots and claimed the end machines were the best. Some of their best adventures were spent attending Hot August Nights in Reno or driving up to Idaho with their friends to buy lottery tickets on a Saturday afternoon. Bea is a beloved wife, mother, grandmother, aunt, sister, and friend who will be missed profoundly. While there is a hole missing in many hearts, the world was a better place because of Bea. Bea is preceded in death by her parents, son Donald Roden and brothers: Dal, Tim, Ken, Les and Ross Lamb. Bea is survived by Troy Villiard; son Ronald Roden (Vickie) and daughter Jackie Roden; brother Eugene Lamb; grandchildren, Travis, Shannon, Aaron, Trent, Derek, Jessica, Nikia, Kennlyn and seven great grandchildren. Also, so many other family members and friends who have played such a significant part of Bea’s life. Funeral services will be held at 11:00 a.m. on Wednesday, April 20th at 11:00 a.m. at the Mountain Shadows 7th Ward, 7925 South 2700 West, West Jordan, Utah 84088.

Bernice Lamb slipped away peacefully on April 14, 2022 in West Jordan, Utah. Born on May 8, 1949 to Verald and Florence Lamb, Bea was the youngest of seven children. Bernice grew up and lived in Midvale, Utah where she made many lifelong friends... View Obituary & Service Information

The family of Bernice Lamb created this Life Tributes page to make it easy to share your memories.

Send flowers to the Lamb family.