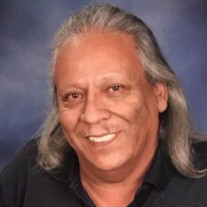 Bob Anthony “Tony” Fresquez passed away on April 5, 2022, in his home surrounded by his family after a long and hard-fought battle with cancer and kidney disease. He was sweet 16 with 55 years of experience. Tony was born on May 13, 1950, in Dixon, NM to Samuel Fresquez Sr. and Ignacita Martinez. He is survived by his wife, RoseMarie Silva Fresquez, daughter, Andrea (Bennett Bitney Jr.) Fresquez, son Andrew (Krista Smith) Fresquez, and son Adam Fresquez, brothers, Sam (Bea) Fresquez Jr., Johnny Fresquez, and Jerry Fresquez. sister, Arlene (Harry) Begay, mother-In-law, Tillie V. Silva, many brothers-in-law, sisters-in-law, nieces, nephews, cousins, and friends. He was preceded in death by his parents and siblings, Kathy (Tony) Medina, Samantha, and Henry Fresquez. Tony was raised in Bingham and Lark. He attended Bingham High School and made many lifelong friends there. Family, Faith, and Friendship were so important to him. As he got older, he would often say how hard it was to see friends that he had since he was a child start passing away and that he hoped he would go to Heaven so he could see them again. He was also the ultimate Jokester and had the most amazing sense of humor. He was known for giving nick names and if you were lucky enough to get one from him, that meant you were very special to him and stuck with it for life. He was a proud American who enlisted in the United States Marine Corp. at the age of 18. He went to Vietnam where he bravely served as a Tunnel Rat and Anti-tank Assaultman. He was severely wounded in combat and almost didn’t survive. He was Honorably Discharged and was awarded the Purple Heart Medal, Combat Action Ribbon, National Defense Service Medal, Vietnam Service Medal with 1 star, Republic of Vietnam Campaign Medal with device, and Rifle Sharpshooter Badge. He didn’t talk much about his experiences in Vietnam and would often say, “If you were there, you know what happened, and there’s no reason to talk about it.” Thank you for your service, Dad! On February 8, 1975, he married RoseMarie Silva from Midvale, UT. Tony was raised in Bingham and Lark and after they were married, they lived together in Lark, UT and eventually settled in West Jordan where he lived for the remainder of his life. They were married for 47 years and had three children together, Andrea, Andrew, and Adam. Tony and Rose were the ultimate example of what a marriage should be. They enjoyed so many happy times together over the years but also endured difficult health hardships. Throughout it all, they were there for each other despite any obstacle and made it through the good and the hard times because of their immense faith in each other and God. Tony worked as a Heavy Equipment Operator at Tooele Army Depot for 20 years. He was hard working, dependable and took pride in his work and doing a good job. Because of him, his family always had what they needed, and we never wanted for anything, especially love and support. He never turned his back on anyone that was struggling and would help anyone that needed it even if that meant he may struggle himself. He was a very caring, honorable, and humble man. When he was younger, he enjoyed deer hunting and there were many adventures and stories that came about because of those hunting trips with his brothers, that most times ended up at the Drift Inn. He also loved camping and river fishing, especially in American Fork canyon. As he got older, he loved to spend time working on his yard and camping in the Uintah’s with his family. He also enjoyed watching his favorite Sports Teams, The Dallas Cowboys, Utah Jazz, and BYU Football. One of Tony’s greatest joys and treasures were his grandchildren and great-grandchildren. He loved spending time with them. He is also survived by grandson, Cody (Lexi Kelly) Fresquez, granddaughter’s Dakotah, Farrah, and Erykah Bitney and Anyiah Fresquez, grandson Roman Fresquez and great-grandsons Shaydyn and Destyn Fresquez. He was so proud of each one of you and you all were a huge light in his life. Thank you to all the staff at Caregiver Support Network Home Health & Hospice. Special thank you to his hospice nurse, MaryBeth for taking such great care of him and for the emotional support that you provided to our family during this difficult time. We are forever grateful to you. Tony was and will always be our beloved Husband, Dad, Grandpa, Brother, Uncle, Cousin, and Friend. Thank you for being such a great example to us all of what it means to be a genuinely good person. Thank you for all that you have done for us throughout our lives and for always being there. We are blessed because you were a part of our lives. You were the best of the best and our lives will never be the same without you. You are already missed more than words could ever express but we find comfort that your pain and suffering is over. We love you to the moon and back, always, and forever. Public viewing will be on Wednesday, April 20, 2022, at Goff Mortuary (8090 S. State St., Midvale, UT 84047) from 6:00-7:00 pm with a Rosary to follow from 7:00-8:00 pm. The second viewing will be on Thursday, April 21, 2022, from 10:00-11:00 am at St. Joseph the Worker Catholic Church (7405 S. Redwood Rd., West Jordan, UT 84084) with funeral mass at St. Joseph’s from 11:00 am-12:00 pm. Interment will take place following mass at West Jordan City Cemetery (7925 S. 1300 W., West Jordan, UT 84088.

Bob Anthony &#8220;Tony&#8221; Fresquez passed away on April 5, 2022, in his home surrounded by his family after a long and hard-fought battle with cancer and kidney disease. He was sweet 16 with 55 years of experience. Tony was born on May... View Obituary & Service Information

The family of Bob Anthony “Tony” Fresquez created this Life Tributes page to make it easy to share your memories.

Send flowers to the Fresquez family.