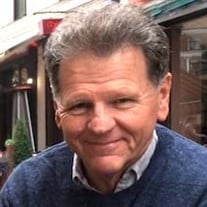 Ivern Movell Bradley III (Brad), a loving husband, father, and grandfather peacefully passed away on Friday, June 17th, 2022, at home surrounded by family. Having been diagnosed with dementia (PPA) four years earlier, he suffered a stroke and passed through the veil several days later. He was one month shy of his 70th birthday. Brad was born July 18th, 1952 in Ogden, Utah to Ivern (Brad) and Judy Sorensen Bradley. He spent his childhood in Hunter, Utah and graduated from Cyprus High School in 1970, where he enjoyed playing football. After graduation he served a mission in Northern Germany from 1971-1973. He attended Brigham Young University where he met the love of his life, Cherie Blair. They married in the Oakland California Temple on August 17th, 1974. Brad treasured 48 years of companionship with Cherie. He adored his 5 children, Charlotte, Clint, Katie, Lindsey, and Derek. They raised their family in Hunter, Taylorsville, and Draper Utah. Brad developed a fascination with flight and airplanes while working for Western Airlines (later Delta). While working at the airline, he graduated from the University of Utah with a degree in accounting. His work at the airlines facilitated a lifelong love of travel, including countless family trips to Hawaii, his favorite destination. While working for Delta, he began preparing income tax returns on the side in a small office in his home, mostly for friends, family, and work associates. It eventually grew into something that demanded his full attention. He retired from Delta in 1994 and, from these humble beginnings, Brad’s practice became a successful CPA firm that employed many people. Brad was a gifted CPA who gave both time and a listening ear to his clients. He also mentored his sons and sons-in-law, allowing them to be a part of what he built. Whatever Brad did, he did it 100%! He was industrious and devoted his time to his family, his faith, his work, and his hobbies. Brad loved the outdoors. You could often find him running, mountain biking, taking care of his yard, camping, and attending BYU football games. He had a special love of mountain biking and often spent his lunch hour on the trails in Corner Canyon. If Brad ever went missing during a family gathering, there was a good chance you would find him with the grandkids jumping on the trampoline or playing with them on the backyard swing set. Brad enjoyed traveling with his wife Cherie. They visited many countries and have wonderful memories of sharing time with family and dear friends while experiencing different cultures and the varied beauties of the world. Brad’s love for the Lord was central to who he was and how he chose to live his life, always striving to follow Him. He was a faithful member of the Church of Jesus Christ of Latter-Day Saints where he served in many different callings and influenced the lives of so many for good. He and Cherie also had the privilege of serving in the Draper Temple for several years, an experience they both deeply cherished. He also served his community as a member of the Draper/Riverton Rotary Club. Brad is survived by his wife Cherie, his children, Charlotte (Rick) Van Valkenburgh, Clint (Brittany) Bradley, Katie (Nate) Delahunty, Lindsey (Britton) Johnsen, Derek (Jenny) Bradley, 23 grandchildren, and siblings: Jerry, Mike, and Patty. He is preceded in death by his parents, and sisters Lori Bench and Kelly Peacock. His family would like to thank Jeff and Mona Call and Dignity Hospice for the loving support they gave Cherie while caring for Brad. Funeral services will be held at 11:00 am on Saturday, June 25, 2022, at 11632 South Night Heron Road, South Jordan, Utah. A viewing will be held Friday evening from 6:00 to 8:00 pm at the Anderson & Goff Mortuary located at 11859 South 700 East, Draper, Utah and on Saturday morning at the church one hour prior to services. Interment will be in the Larkin Sunset Gardens Cemetery. The funeral services will be livestreamed at: https://m.youtube.com/channel/UCVmHAwQGBoIe1pK1BIuo6Vw/live _____________________________________________________________________________

The family of Brad Bradley created this Life Tributes page to make it easy to share your memories.

Send flowers to the Bradley family.