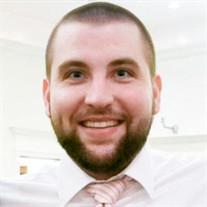 Brady McKay Hoglund was born in American Fork, UT to Gary and Collett Hoglund on October 30, 1991. The youngest of seven siblings, he never missed an opportunity to remind all of them that he was unquestionably the favorite child. Brady’s wit and quick sense of humor were one-of-a-kind and he never failed to make others laugh — anytime, anywhere. Those who were lucky enough to know him would be the first to tell you that Brady’s capacity for humor was as remarkable as his sensitivity and compassion. Being a part of his inner circle was an honor reserved for those who were lucky enough to be trusted and loved by him. The sweetness and kindness he exuded was admirable, and his inviting energy, sparkly blue eyes, and contagious smile allowed others to feel comfortable with him instantly. He took great pleasure in teasing his sisters, unable to resist an opportunity to hide someone’s phone, a set of keys, or shoes. He always had a quick comeback or inappropriate remark that would make everyone laugh. This mischievousness drew his nieces and nephews to him, and they would giggle as they played innocent pranks together. Brady graduated from Pleasant Grove High School in 2010, where he played on the sophomore, junior varsity, and varsity basketball teams. He was a dedicated player, committed to perfecting and improving his game - including his famous three-point shots. He loved sports of all kinds, especially basketball, which he was drawn to from a young age. He loved to “shoot hoops” and played Jr. Jazz while growing up. He was dedicated to March Madness, once even cashing in his accrued vacation time so he wouldn’t have to miss a moment of it. He also loved the NBA, especially the Utah Jazz, and never missed watching them play. Attending any kind of game with his dad was something he looked forward to, and they went to many, including NBA Playoffs when the Jazz were playing, BYU football, University of Utah football, and even traveling to see the Colorado Rockies. In May 2019, he graduated from the University of Utah with a bachelor’s degree in nursing, and accepted a position as a Registered Nurse in the neuro unit at University Hospital. His gentle nature, combined with his levity and professionalism, was a breath of fresh air for many, and a comfort to his patients and coworkers alike. The impact he made was substantial, even earning him two separate nominations for the Patient Promise Award. He had a love for loud music, working out, hiking, snowboarding, and wakeboarding, with an adventurous streak that included a disregard for posted speed limits, cliff jumping at Lake Powell, and a celebratory skydive in Southern Utah after his high school graduation. In contrast, he also enjoyed reading, had a soft spot for animals — especially French Bulldogs and pugs — and always made sure to make time for games with his family. Brady married Misty Martinez in 2014 and, although they divorced after four and a half years, they remained close friends until his passing. Their continued friendship is yet another testament to Brady’s fierce loyalty to those he cared deeply about. He passed away unexpectedly on April 8, 2022. His family was able to spend his last moments together with him and will forever be grateful for the experience. He is survived by his parents, Gary and Collett; his siblings Tiffany, Brittany, Haylie, Nicole, and Ben (Shalyn); and his nieces and nephews who adored him; Abigail, Oliver, Elsie, Gracie, Emmie, McKenzie and Niko. He was preceded in death by his brother, Jake and his grandparents: Jeanine Thomas, Erald Ballard, and Bill and Mary Hoglund. Brady was laid to rest next to his big brother, Jake, at the Orem City Cemetery on April 13, 2022. He will be missed “big time.”

Brady McKay Hoglund was born in American Fork, UT to Gary and Collett Hoglund on October 30, 1991. The youngest of seven siblings, he never missed an opportunity to remind all of them that he was unquestionably the favorite child. Brady&#8217;s... View Obituary & Service Information

The family of Brady McKay Hoglund created this Life Tributes page to make it easy to share your memories.

Brady McKay Hoglund was born in American Fork, UT to Gary and...

Send flowers to the Hoglund family.