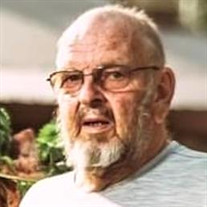 Dale Lyn Greenhalgh, 71, passed away peacefully in his home surrounded by his family on Friday, April 15, 2022 after a valiant battle with cancer. Dale was born December 24, 1950, to Roy William and Mildred Heelis in Payson, Utah. He married his best friend and eternal companion, Linda Pay on August 6, 1971 in the Manti Temple. Dale grew up one of five brothers in Nephi where he resided, raised his family and refused to be away from, even for his honeymoon. Dale graduated from Juab high school where he was known for his activity in sports, mostly for his muscle. Dale could also out race anyone on the track and received many medals. Dale developed a love of cooking at an early age from watching his mother, which led him to the family tradition of cooking. Dale enjoyed cooking professionally for 34 years and was employed at Mickelson's Restaurant with his brothers, Norms Cafe, Cedar Hollow and Dennys. His love of cooking continued at home for his family and anyone in need. In his later life he worked at Alcoa and NRP. He was a devoted husband and father, his greatest blessings in life were his kids and grandkids. He loved taking them hunting (looking for pink elephants) and watching them play sports. He was never afraid to get his hands dirty competing for the best backyard and garden in town. His pride and joy was gathering firewood with his grandkids, sometimes until the front tires of the truck were off the ground. He had the biggest heart and he loved everyone. No matter who he came in contact with they would become his friend. He is survived by his loving wife Linda, his five children, (Chris) Jenny Olsen, Kellie Greenhalgh, (Travis) Heather Ballow, Kevin (Allie) Greenhalgh, Michael (Miranda) Greenhalgh and 13 grandchildren that were his pride and joy. Dale is preceded in death by his parents Roy and Mildred, 4 brothers Norman, Gary, Wilbur, Richard and 1 sister baby girl. Funeral services will be Friday, April 22, 2022 at 11:00 am at the 4/5th Ward Church (500 N 355 East, Nephi) with a viewing one hour prior and also Thursday, April 21, 2022 from 6:00-8:00 pm at Anderson Funeral Home (94 West 300 North).

Dale Lyn Greenhalgh, 71, passed away peacefully in his home surrounded by his family on Friday, April 15, 2022 after a valiant battle with cancer. Dale was born December 24, 1950, to Roy William and Mildred Heelis in Payson, Utah. He married... View Obituary & Service Information

The family of Dale Lyn Greenhalgh created this Life Tributes page to make it easy to share your memories.

Dale Lyn Greenhalgh, 71, passed away peacefully in his home surrounded...

Send flowers to the Greenhalgh family.