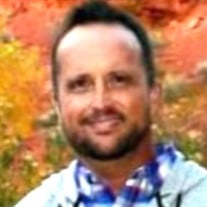 David Meacham slipped through the veil into the loving arms of his Savior and was welcomed into heaven by his big brother Mike on May 27, 2022. Dave was born on October 24, 1972 to Patricia Meacham in Escondido, California. His family later moved to St George, Utah when he did most of his growing up. Dave and his brother Lelan spent their childhood exploring, riding peddle cars, mini bikes and helping on the farm they grew up on. As he got older he took up the hobbies of skiing, snowboarding and hiking, he enjoyed being outdoors spending time with his friends. Dave always had a love and interest in cars, he traded them in frequently and probably owned over 15 cars in his lifetime. He especially loved imported foreign cars and even owned a classic Mercedes at one time. Dave came with a quick wit and a sarcastic sense of humor. He was always the life of the party and could make you laugh at will. He had a kind heart, and was always willing to help anyone in need. Dave was smart and always did really well in school. He graduated from Pine View High school in 1990 and then graduated with a bachelor’s degree in business from SUU. While he was in college Dave joined the Sigma Chi fraternity, he was president of the fraternity in 1994. He loved his brothers and grew strong friendships and bonds that lasted beyond college. He met and married the love of his life, Michelle Foster, in April 1996. In the over 26 years of marriage, they had 5 beautiful and intelligent children, 3 daughters and 2 sons. Like most parents, Dave loved his kids more than life. His creative ability allowed him to craft amazing Halloween costumes, Valentine boxes, and countless other school projects for them. Dave worked and excelled in retail management for most of his career, his fun personality made him everyone’s favorite boss. As much as he struggled in the last few years of his life, he tried his hardest and did his best to be there for and help his wife and kids. They were his life and what he lived for. From a young age he was given an incredibly heavy burden, which he carried with courage and strength for most of his life. As time moved on, the burden continued to weigh heavy. Those who knew him most tried their best to help him, but had to watch helplessly as he struggled, knowing that they themselves would never want to shoulder that same cross. Dave has left behind so many family and friends that loved him deeply and will miss him. He is survived by his sweet mother, Patricia Meacham; his beautiful wife, Michelle; his 5 amazing kids, Lauryn, Jake, Abby, Ava, and Gavin; siblings Richard, Steven, Val, Debra, and Lelan; and several nieces and nephews. He is proceeded in death by his grandparents and his brother, Michael. We love you, Dave, and will miss you greatly. Until we meet again… There will be a celebration of life to honor Dave on Saturday June 25, 2022 at 10:00 A.M. at The Church of Jesus Christ of Latter Day Saints building located at 240 E 1060 S, Ivins, UT 84738.

David Meacham slipped through the veil into the loving arms of his Savior and was welcomed into heaven by his big brother Mike on May 27, 2022. Dave was born on October 24, 1972 to Patricia Meacham in Escondido, California. His family later... View Obituary & Service Information

The family of David Meacham created this Life Tributes page to make it easy to share your memories.

David Meacham slipped through the veil into the loving arms of...

Send flowers to the Meacham family.