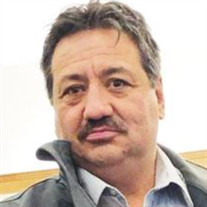 David Lionel Suazo passed away May 14, 2022 at the age of 57, fighting cancer until the very end. He was born January 26, 1965 to Lionel and Hilda Erichsen Suazo in Salt Lake City Utah. His family lived in the Midvale/Murray area. David enjoyed his large extended family including many cousins, aunts and uncles. He remained especially close to his cousins. He was imaginative, fearless and had an excellent sense of humor. David was proud to be a 2nd generation Ironworker and being a member of Iron Workers local # 27. He was a superb welder and took satisfaction and pride in a job well done. He was persistent in his pursuit to improve his circumstances, despite many struggles, and dealt with difficult situations with generosity and humor. David met Cathy Ramos in 2001 and together they were blessed with their son, Daniel Lionel Suazo. David was immensely proud of Danny and his service in the United States Marine Corps. David married Cathy Wilson in 2011 and enjoyed time on their ranch in Wyoming. He was fond of all animals and enjoyed a good meal and traveling. No distance was too far to try a new restaurant. David was a member of the Wheatland Wyoming Ward, Church of Jesus Christ of Latter-Day Saints and was a firm believer in Jesus Christ as his Lord and Savior. David was preceded in death by his parents; Hilda Erichsen and Lionel Suazo and is survived by his son, Danny Suazo, wife Cathy Wilson, siblings; Robert Jacques, Tony Fillman, Kitty Widener (Lester), Brett Ellis (Kory), Sarah Rice (Nik), Jacob Suazo (Julie), Rachel Suazo, Rebecca King (Sean), Kate Gwilliam, Natalie Cragun (Steve), Christopher Suazo (Hailey), step-mother Linda Suazo, many nieces, nephews, aunts uncles and cousins. The family appreciates the assistance given from the doctors and nurses that helped make David more comfortable in his final days. May David rest in peace from the burdens of his mind and heart. Graveside Services will be held on Tuesday, May 17 at 12 pm in at Levan Cemetery, 400 South 600 East, Levan, Utah.

David Lionel Suazo passed away May 14, 2022 at the age of 57, fighting cancer until the very end. He was born January 26, 1965 to Lionel and Hilda Erichsen Suazo in Salt Lake City Utah. His family lived in the Midvale/Murray area. David enjoyed... View Obituary & Service Information

The family of David Lionel Suazo created this Life Tributes page to make it easy to share your memories.

Send flowers to the Suazo family.