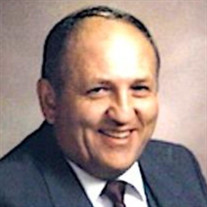 De Len Thomas Stears, 85, passed away April 25, 2022, in Sandy, Utah. He was born July 17th, 1936, in Idaho Falls, Idaho to Len Taylor Stears and Thelma Agnes Parks. He was the second of 4 children. He grew up in Idaho Falls, Idaho and graduated from Shelley High School in 1954. It was during his time at Shelley High that he met his eternal sweetheart, Lois Rae Brooks. They were married in the Idaho Falls Temple June 23, 1954. 5 days later he left for basic training with the United States Air Force where he served our Country for 10 years. Following his service, he started his career with the Bureau of Land Management and he and Lois eventually settled in Shelley, Idaho where they finished raising their 4 children. He was an active member of the Church of Jesus Christ of Latter-Day Saints and served in many callings including Young Mens, Stake Mission President, Ward and Stake Clerk, teaching Sunday School, Stake High Council and served 7 Stake Missions as a part of the Seventy. De Len and Lois also served as temple workers in the Idaho Falls temple for almost 5 years. He is survived by a son Michael (Julie); two daughters, Bonnie (Kent) Searle and Julie (John) Dietz; his sister, Della Goody, daughter-in-law, Laura Kaye Jessen; 22 grandchildren and 58 great-grandchildren. He has been reunited with his beautiful bride, Lois, his son Gary, grandson Shane as well as his parents and brothers. The family wishes to express thanks to A+ Hospice for the compassionate care they provided De Len at the end of his life. They are also grateful to his primary care doctor, Joanna Tierney for the 9 years she so lovingly cared for him. There will be a viewing Friday, April 29th from 10:00 a.m.-10:45 a.m. followed by funeral services at 11:00 a.m. (Quail Hollow Ward, 9245 S. Quail Run Dr., Sandy, Utah 84093). On Saturday, April 30th, 2022, at 11:00 a.m there will be a graveside service at the Shelley Hillcrest Cemetery (767 E. 1200 N., Shelley, Idaho 83274) with Full Military Honors.

The family of De Len Thomas Stears created this Life Tributes page to make it easy to share your memories.

Send flowers to the Stears family.