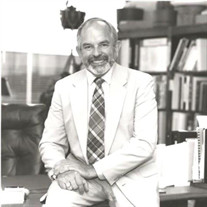 Draper, UT—George Edward "Ed" Patience, 83, passed at the Huntsman Cancer Center with his wife by his side on June 4th, 2022. He was born October 25, 1938 to Ellen Jane Champion Patience and George Leonard Patience from Midvale, Utah. Ed was welcomed into the Patience family by his older sister Corinne, "Sis." Ed's early schooling was in Midvale, Utah, and graduated "a beet digger" from Jordan High School in 1956. He was a merit scholar and earned a scholarship to attend the University of Utah. Ed left the University to become a land surveyor and construction inspector. Ed was never afraid of hard work and his philosophy was to "always put in maximum effort!" Early in Ed's working career he spent two summers in Yellowstone working on fish traps and road construction. Ed developed a lifelong love for Yellowstone and the outdoors. In his thirties, Ed worked nights at Kennecott Copper Mine while attending the University of Utah to receive his Bachelor of Science in Civil Engineering. Shortly after graduation, while working for Call Engineering, he was involved in the construction of Flaming Gorge Dam, Ririe Dam, Libby Dam and many other dam projects in Utah and nearby states. Ed loved to read and always had a library of books. Education was extremely important to Ed. He encouraged his daughters and grandchildren to strive to be all they could be. In 1976 he founded P/S Associates, an Engineering and Survey firm in Salt Lake City, Utah. Ed often said, he soon discovered having your own company, and having a business partner, was like being married to your business partner with no benefits. In 1980, he became Assistant Division Manager and then Division Manager and Sr. Vice President for DMJM (now AECOM) in their Salt Lake City office. He was Managing Principal on numerous, highway, freeway, bridge, wastewater treatment plants, airport and county jail projects. One of his proudest achievements was Managing Principal for DMJM , for the UTA Salt Lake City Light Rail Project. This was the first section of light rail built between California and Denver, Colorado. He was successfully able to integrate architects and engineers on complex projects in a single office. Ed made many lifelong friends in his work and school careers. He had a charming sense of humor and the intellect and knowledge to answer any question. Ed was a mentor, a leader, and a manager, with this combination and his common sense, he created a very successful career. Ed was also a single dad, juggling his work career with being a daddy to his two girls. He worked on the site proposal for the Superconducting Super Collider for the state of Oklahoma, receiving a written commendation from the governor of Oklahoma. In March of 2010 Ed received the designation of Fellow, by the American Society of Civil Engineers in Washington D.C. Ed fell in love and married his wife Kathy in 1992, and when retiring in the year 2000, they moved to the beautiful Mendocino Coast in California, to build their beach dream home. Every day of living on the coast was magical, days full of watching the waves and listening to the ocean roar. There they met many interesting people, and they became their good friends. During their time in California, they also traveled to over 30 countries, and took many trips with their RV around the United States. When they left Mendocino and returned to Utah, they took with them, wonderful memories of their 15 years of living, between the California Redwoods and the Pacific Ocean. Ed and Kathy were always ready for a new, fun adventure together. Where you saw one of them, you saw the other! Ed is survived by his wife Kathleen "Kathy." He is also survived by two daughters from a previous marriage, Debra (Russ) Bolkcom, Georgia (Aaron) Seljaas, stepsons, Todd (Julia) Wamboldt, Troy (Michelle) Wamboldt, also, sister Corinne Hathaway, brother-in-law Steve Easton, and grandchildren Tyson, Kaden (Brook), Grady, Tanner, Chase, Hailey (Shayden), Amelia (Jason), Carson, Jackson, Katlyn, Colton, Alec, Ava and great grandchildren Emi, Timmy, Elaine, Christian, Jaxon, also many nieces and nephews. He was preceded in death by his parents George and Ellen Patience, brothers-in-law Vandis "Van" Hathaway, and Dennis Easton, sisters-in-law Karen Easton and Roberta "Bobbi" Easton, and stepson Stacy Hoblit. The family wishes to thank The Huntsman Cancer Center doctors, nurses, and the Hospice nurses for their loving care, and ask that any memorial donations be made to the Huntsman Cancer Center in Salt Lake City in Ed's name. According to Ed's wishes there will be no funeral service, but there will be a celebration of life at a later date.

Draper, UT&#8212;George Edward "Ed" Patience, 83, passed at the Huntsman Cancer Center with his wife by his side on June 4th, 2022. He was born October 25, 1938 to Ellen Jane Champion Patience and George Leonard Patience from Midvale, Utah.... View Obituary & Service Information

The family of George (Ed) Patience created this Life Tributes page to make it easy to share your memories.

Send flowers to the Patience family.