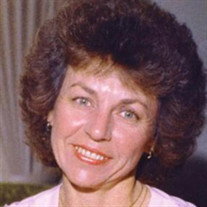 Geri S. Kern, 84, of West Jordan, died Tuesday (March 22, 2022) at home with her three children and loving spouse at her bedside. A graveside service will be held at Larkin Sunset Gardens Cemetery (1950 E. 10600 S. Sandy, UT) on Saturday, March 26 at noon. A family and close friend viewing will be held from 10-11:30 a.m. at Goff Mortuary in Midvale. Geraldine Sund Kern, the daughter of Edwin and Elva (Burns) Sund, was born July 27, 1937, in Murray, Utah. She is the youngest of four children. Geri graduated from Jordan High School, class of 1955. She retired from UPS in 1994. Despite success in school and the workplace, Geri said her most significant accomplishment was her three children. Geri married Charles Joseph “Joe” Kern in 1990. The two enjoyed a fulfilling marriage for the past thirty-two years. She leaves behind her husband, Joe, sisters: Rhea Warburton and Marian Sund, children: Roger Smart, Jody Skogerboe (Korte) Young, Lana Skogerboe (Dale) Burningham, and step-children: Jason (Kim) Kern, and Christine (Todd) Lambert. Also, many grandchildren and great-grandchildren, nephews: Lynn Warburton and Don Warburton. Preceding her in death were her parents, brother, Wesley Sund, and brother-in-law, Vearl Warburton. May you rest in peace, our kind and loving mother, devoted grandmother, and special sweetheart. Card of Thanks To everyone who has supported us following the death of Geri, we would like to express our sincere thanks and appreciation. Your many acts of kindness and sympathy continue to be a great comfort to us in our time of sorrow. We especially appreciate your time today in traveling, attending, and participating in the services.

The family of Geraldine "Geri" (Sund) Kern created this Life Tributes page to make it easy to share your memories.