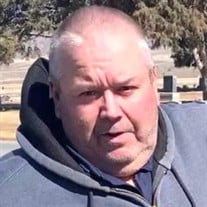 John R LaChance was called home unexpectedly by his loving Heavenly Father May 18th, 2022. John was born November 24th, 1964 to John and Cynthia Mock LaChance in Santa Clara, California. John was raised in the Bay Area till he was 15 at which time he went to live with his Grandma and Grandpa Mock in Utah. While there he attended Provo High School. During his senior year he and some of his best friends won the 1983 State football championship. John looked back on these times as some of his fondest memories. For a short time, John lived in Dayton, Washington, then back in California before returning to Utah to care for his loving mother till she passed away in 1997. That same year he met his devoted wife, Tammy, whom he loved beyond all measure. Along with Tammy came her two sons Devin, age 9, and David, age 8, who he came to love as much as he loved their mother, he loved them as his own children. In 2002 they made their home in Nephi, Utah. In 2003 they added daddy's little girl Haley to the mix. In John's eyes his little girl hung the Moon. In 2009 brought John's duplicate Jack; oh how he loved his little big, boy with all of his heart. John raised all of his children to be strong. John was the rock of his family. John had many jobs but his passion was in a big rig. He trucked for his family and made dear friends all along the way. To John, his friends were his family. Our dear friends David Swapp and Jack Reilley were his brothers from another mother, along with so many others. Thank you for being there for him. Besides John's family and trucking his passions included turning wrenches, fishing, camping, snow skiing, water skiing, shooting guns and let's not forget his dogs. John and Tammy were blessed with two beautiful granddaughters Keeva and Tova, they were the apple of Grandpa's eye. He loved seeing them and teasing them. Oh, how John love to tease. You could never tell if he was teasing or serious. If you were his true friend, you know all too well how he loved to tease. He will be deeply missed. John is survived by his best friend and Loving Wife Tammy R LaChance, sons Devin (Genevieve) Beesley, David Beesley, Jack LaChance, daughter Haley LaChance, father John H LaChance, stepmother Mary Reynolds, brothers: Nathan LaChance, Dave Swapp, Dale LaChance, Mike (Blanca) LaChance, Dominic (Mitchie) LaChance, Brad (Amanda) Reynolds, sister Katherine (Brian) Reynolds Putkey, in-laws: Pam and Jerry Randall, Brian, Tracy, Taresa, and Jeffrey, 24 nieces and nephews, his beautiful granddaughters Keeva and Tova Beesley, and numerous extended family members. John is preceded in death by his beautiful mother Cynthia Marie Mock LaChance, his grandparents Chad and Jolene mock, Florence Miller, Jack and Irma LaChance, Boyd Allen, and little brother Andre LaChance. John's celebration of life will be held June 25th, 2022 at the Old Mill Park, 100 South Main Street, Nephi, Utah, from 11:00 am till 1:00 pm. All are welcome to join in sharing their memories and stories of friendship. Casual dress welcome. In lieu of flowers, donations can be made in Tammy LaChance's name at UCCU or Cache Valley Bank to help offset expenses. _____________________________________________________________________________

John R LaChance was called home unexpectedly by his loving Heavenly Father May 18th, 2022. John was born November 24th, 1964 to John and Cynthia Mock LaChance in Santa Clara, California. John was raised in the Bay Area till he was 15 at which... View Obituary & Service Information

The family of John R LaChance created this Life Tributes page to make it easy to share your memories.

Send flowers to the LaChance family.