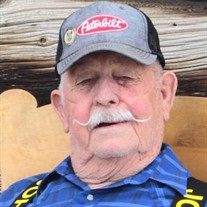 Kenneth Ray Ingram, 89, beloved husband, father, grandfather, uncle and friend, passed away April 14, 2022, surrounded by his loving family. Ken was born April 4, 1933, in Nephi, Utah to Moroni Smith and Mary Louise Mortensen Ingram. He grew up on the family farm and attended school in Nephi, where he walked to school uphill, both ways. Ken joined the National Guard in September of 1950. He was activated and sent to Oklahoma soon after enlisting where he completed his senior year of high school. The Guard allowed him to come home to graduate from Juab High School with his class. Shortly after graduation, his unit was deployed to serve in the Korean War. The day before they were set to return home, they were pinned down under enemy fire, but survived the night and were able to return home as scheduled. After Ken returned from Korea, he went to work at the Nephi Rubber Plant where he met the love of his life, Phyllis Anderson. They were married January 14, 1955. They were sealed in the Manti Temple on July 18, 1958. Ken and Phyllis were blessed with two children, Randy K. Ingram and Julie A. Ingram Robinson. Ken eventually went to work full time with the 116th Engineer Battalion of the National Guard. On April 4, 1993, he was “voluntold” that his days with the Guard were done. It was a sad day for Ken. He retired from the Utah National Guard after 43 years of service. He spent 40 years in the Nephi Fire Department, 39 years in the Juab County Search & Rescue and 29 years with the American Legion Post 1. Ken was always very proud that Nephi was Post 1. Ken was a member of the Church of Jesus Christ of Latter-Day Saints. He worked with the youth of the ward and was also on the ward reunion committee for several years. One of his treasured accomplishments was working with Randy, Steve Howarth, and Craig Park to make sure all three of them earned their Eagle Scouts. Ken was preceded in death by his sweetheart Phyllis, his son Randy, his parents, siblings Nila, Earl, Blaine and Bonnie. He is survived by his daughter Julie and son-in-law Nyle, grandchildren Amy (Shane) Adams, Ryan (Crystal) Robinson, Nichole (Chad) Ostler, Marci (Eric) Johnson, Megan (Sam) Thomas and Devan (Stacey) Ingram, 19 great-grandchildren, many nieces and nephews that he loved dearly, and his good friend and neighbor Mel. A heartfelt thanks to the KFC Krew who were a special part of Dad’s life: Nyle, Larry B., Steve, Guy, Travis, Weston, Larry I and others. We would also like to extend a special thank you to Dr. Jim Rosenbeck, Kori Slater, and the staff at CVMC for the excellent care they have provided to Dad over the years. You are awesome! Services will be held on Wednesday, April 20 at the Nephi 1st, 2nd, & 7th Ward Church, 222 South 100 East. There will be a viewing from 9:30 – 10:45, with services starting at 11:00. Interment at Vine Bluff Cemetery in Nephi.

The family of Kenneth Ray Ingram created this Life Tributes page to make it easy to share your memories.

Send flowers to the Ingram family.