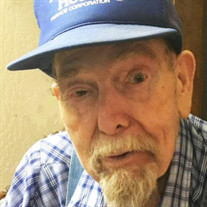 On May 18, 2022 our brother, father, grandfather and great grandfather, Kenneth J Smith, left this world to join his wife, Mabel Ann Ward, on their eternal journey. He was preceded in death by his mother Julia, father Paul, stepmother Gertrude, and his sisters Gloria and Onyx. He is survived by his brother Paul Smith, sons Kenneth Jr (Glori), Thomas, Kelly (Myrnel), Tim (Dana) and Jon, and daughter Patricia (Daniel), 28 grandchildren, and 43 great-grandchildren. Ken was born in Evanston, Wyoming on June 21, 1930. At that time his family lived on a nearby sheep ranch. His father’s work took the family to several towns in western Wyoming and northern Utah, and he graduated from high school in Kemmerer, Wyoming. He soon joined the Wyoming Army National Guard which started his career in communications and electronics, taking him to schools in the eastern and mid-western states. His Guard service also led him to meet and marry his wife, Mabel Ann Ward of LaGrange Wyoming, in 1954. Their marriage was solemnized in the Denver Temple of the Church of Jesus Christ of Latter-Day Saints in 2005. After they married, he went to work for Bell Telephone of Dubois, Wyoming. His work with the phone company gave him the opportunity to take a temporary job in Alaska, where he helped construct the early warning radar system facing the Soviet Union. He was based in Aniak, a village about 320 miles west of Anchorage, where he moved his young wife and two sons. This work led to a position in Anchorage with the Civil Aeronautics Authority, predecessor of the Federal Aviation Administration (FAA). His job as an electronic flight engineer took him all over the state of Alaska. The family eventually settled in the outskirts of Anchorage. It was not much longer that a third son and a daughter were born in Alaska. Three exciting things happened in 1964. The family experienced the Alaska Earthquake with a magnitude of 9.2, their 5th child, a son, was born, and the FAA transferred Ken to Japan where the family lived for 4 years, while his job took him into Hong Kong, the Philippines, Taiwan, and South Korea. He also traveled throughout Japan and was able to take the family to some Japanese sites. Ken loved the outdoors, photography, and painting. He loved to spend time with his family enjoying fishing, hunting, boating, and relaxing at the family cabin. He also took up flying and earned his private pilot, and eventually commercial pilot license. He was a prolific photographer and painter, focusing particularly on the many beautiful places that he was able to travel. Eventually, a sixth child, a son, was added to the family. After retirement, and forty years of Alaska living, his wife persuaded Ken to return to Wyoming to be closer to family. In 2015, after another 20 years, they moved to Utah to be closer to some of their children. They settled in Moroni, Utah where Ken passed away. Kenneth Julian Smith was an amazing man of God and prayed daily to be humble and kind. We look forward to reuniting with him.

On May 18, 2022 our brother, father, grandfather and great grandfather, Kenneth J Smith, left this world to join his wife, Mabel Ann Ward, on their eternal journey. He was preceded in death by his mother Julia, father Paul, stepmother Gertrude,... View Obituary & Service Information

The family of Kenneth Julian Smith created this Life Tributes page to make it easy to share your memories.

Send flowers to the Smith family.