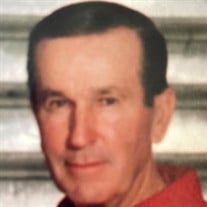 Kirk Dwight Sanders, 80, peacefully passed away Saturday June 4th, 2022, surrounded by his family and loved ones. Kirk was born August 29, 1941 to Glade and Lucy Garrett Sanders. He was the first of five children. He was raised in Nephi and attended the Nephi Central School and later graduated from Juab High School in 1959. He married his sweetheart, Betty Brown, on September 7, 1963 in the Manti Temple. Together they had four children, Jeffery Kirk, Cami Sue, Tricia and Amee Lee. In 1976 they lost their daughter Cami Sue at the age of 10 to Leukemia. This loss deeply affected dad. Kirk started working at the family business, Garrett Service, affectionately known to the locals as “The Serve” at the age of 10 pumping gas, delivering furnace oil and washing cars. Later when the business transitioned to Garrett Honda, Kirk became a self taught mechanic and ran the service department for the dealership. He soon gained a reputation that was known throughout the intermountain west. By being generous with his time and resources and by never overcharging for parts or labor he gained a loyal clientele. He was never too busy to stop what he was doing to help a local out of a jam and was a firm believer in supporting his home town. Dad was a member of the local JC’s club and was the President of the East Juab Little League Association. He held numerous callings in the Church of Jesus Christ of Latter Day Saints. In 1974 Kirk and his father Glade started the Nephi 3rd Ward Fourth of July celebration at the park. As the years went by and the carnival grew it was taken over by the Stake. He built the train, paddy wagon and tire swing, which are still in use today, and has created countless memories and hours of entertainment for the youth of Juab County. Kirk was the snow plow king and loved to plow the sidewalks and driveways for family, friends and countless widows. Dad loved to hunt elk, deer and pheasants and always said there was no prettier sight on all the earth than watching the sunrise from the top of Mt. Nebo. He also enjoyed the Ute Stampede Rodeo and all of the associated activities it included. He made sure we never missed a chuck wagon breakfast with the entire family. If you know Kirk, you know about his quick wit and dry sense of humor. No one could give a good insult quite like dad. Many farmers would come to the shop just to get their daily dose of insults, but they always left with a smile. He loved his grandchildren and great grandchildren beyond compare and will be sorely missed by them. Kirk is survived by his children, Jeff (Katrina) Sanders, Tricia (Rod) Steele and Amee (Jayson) Sperry, all of Nephi, eight grandchildren and four great grandchildren, and sisters Linda (Bob) Murdoch and Ileen Sanders. He was preceded in death by daughter Cami Sue Sanders, parents Glade and Lucy Sanders, brother Merrill G. Sanders and his sweetheart Betty Brown Sanders. A viewing will be held at the Anderson Funeral Home in Nephi on Wednesday, June 8th from 6:00 pm until 8:00 pm. The funeral service will be held at the Nephi Utah North Stake Center Thursday, June 9th from 11:00 am until 1:00 pm with a viewing an hour prior to the service. The family would like to thank Julie Ann Parkin, the home health and hospice staff, and doctor Rasmussen for their compassion and professionalism in helping dad move on to the next leg in his journey. Heaven must have finally found a bike they couldn’t fix so the Lord called his number one mechanic home. We love you dad!

Kirk Dwight Sanders, 80, peacefully passed away Saturday June 4th, 2022, surrounded by his family and loved ones. Kirk was born August 29, 1941 to Glade and Lucy Garrett Sanders. He was the first of five children. He was raised in Nephi and... View Obituary & Service Information

The family of Kirk Dwight Sanders created this Life Tributes page to make it easy to share your memories.

Send flowers to the Sanders family.