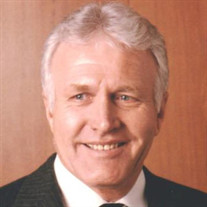 Larry Lee Hansen was born on August 19, 1928, in Ephraim, Utah, to Lester and Mary Ethel Hansen. He spent his childhood herding sheep and working on the family farm. His fondest childhood memories revolved around his relationships with his older brother Phillip and his maternal grandmother. Larry enlisted in the United States Air Force in 1950 and served in Europe for three years. During his military service, he attended the Air Force’s electronics school, where he received training as a specialist in ground control approach radar. He developed a love for electronics and, when he returned from Europe, Larry enrolled at Utah State University, from which he received a BS degree in Electrical Engineering. Larry has been honored as a Distinguished Alumnus of Utah State University. Larry went on to have an exemplary career in the electronics and semiconductor industries. As a young engineer at Litton Industries, Larry led the team that developed the Litton Microwave Oven, which went on to become the pattern for ovens today. He later served as an Executive Vice President and Director of Varian Associates, where he ran Varian's semiconductor manufacturing equipment business. Larry served as a director, and later the President, of the Semiconductor Equipment and Materials Institute, the trade association representing semiconductor manufacturing, design, and supply companies worldwide. He also chaired the Department of Commerce's advisory committee on the semiconductor industry.  Larry served as a member of the board of directors of five publicly-traded companies and many privately-held companies. Larry traveled the world as both a businessman and engineer, and he was a dedicated and commanding leader who expected excellence of himself and his associates.  Larry was a faithful member of the Church of Jesus Christ of Latter-day Saints, and found great satisfaction serving in numerous church callings, including as Bishop of the Los Altos Ward and President of the Los Altos California Stake. He was particularly moved by the doctrine of eternal families, which reflected the love he had for his own family. He was always generous with his love and service to those within his stewardship. Larry was direct and unwavering in his beliefs, and was never afraid of sharing his opinions. He loved a good Western, Pepsi, and pen knives. He thought all umpires were idiots, always had a stash of jellybeans, and sent handwritten cards to all of his family members for every birthday.  As a husband, Larry was devoted to his wife Barbara, particularly as she suffered from illness later in life. He missed her dearly after she was gone. He was a very loyal father who always provided protection and strength to his children, and was a gentle and generous grandfather and great-grandfather. Of all of his many achievements, he was always the most proud of his family. Larry was preceded in death by his wife, Barbara, his parents, and by his siblings Jerry, Connie, Dixie, Teral, and his beloved brother Phil. He is survived by his sister Bonnie, his children Jana (Darryl) Rains, Liz (John) Olson, Brad (Kristina) Hansen, and Karen Hansen, eight grandchildren and eleven great-grandchildren.  Funeral services will be held on Tuesday, May 31st, at the Nephi Stake Center, 351 North 100 West, Nephi, Utah 84648. A family viewing will be held at 10:30 a.m., and funeral service will begin at 11:00 a.m. The service will be live-streamed and recorded on the Goff Mortuary Facebook page.

Larry Lee Hansen was born on August 19, 1928, in Ephraim, Utah, to Lester and Mary Ethel Hansen. He spent his childhood herding sheep and working on the family farm. His fondest childhood memories revolved around his relationships with his older... View Obituary & Service Information

The family of Larry Lee Hansen created this Life Tributes page to make it easy to share your memories.

Send flowers to the Hansen family.