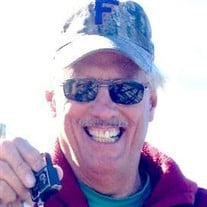 Larry James Ririe passed away at the age of 68, due to a heart attack at his home in Logan, Utah on Wednesday, March 23. He was with his wife Celece when he passed and was comforted in his final moments. Larry was born in Tooele, Utah on December 11th, 1953. He grew up largely in Tooele chasing rabbits and the neighbor’s cats. All wild life trembled in fear as he honed his hunting skills. His longtime friend/partner in crime Craig daubed him Nimrod aka “The Great White Hunter.” These two met in the mission field and a lifetime friendship was made. As this duo terrorized the great state of Utah many pot-gut squirrels, trout, deer, and pheasant paid the ultimate sacrifice to their antics most of which cannot be repeated here. His family would tell you there is nigh a hill that Larry didn’t hunt or harvest a deer on. Larry was a member of the Church of Jesus Christ of Latter-day Saints. He served a mission in the Philippines from 1973 to 1975. He developed a deep love for the country and its people and was very proud of the growth in the years that followed. Larry loved to slip in a story about his time in the Philippines to every family member, friend and often complete strangers every chance he got. You could try to change the subject but Larry was not easily deterred and against your will he would gladly retell a story over and over. Larry’s love for hunting was only superseded by his love for his family and the legacy to be left behind. He loved his wife and children dearly. However, once grandchildren entered the picture the new favorites were quickly established, Grandpa now had a new generation of avid listeners to enjoy his stories and bask in his attention. Larry was an avid fisherman. It didn’t matter if it was 100 degrees, 0 degrees, 4 in the morning or middle of the day Larry was happy to go. Nothing brought him more joy then sitting on a lake shore with a pole in his hand. Sharing that experience with his family was one of the greatest joys of his life. After surviving a heart attack, he was able to go to Pineview with his son and grandson and experience crappy fishing and the yank-fest it can be. It made his day, It turns out you can teach an old dog new tricks. Larry is survived by his wife Celece and six children Laurel Howell, Kenny Ririe, Brayland Ririe, Breeyawn Lybbert, Travis Ririe and Lance Ririe, grandchildren Memphis, Tyler, Kenyon, Kyson, Kipton, MaKyla, Shea, Rafe, Apollo, Rhys, Porter, Sawyer, and Harper, his siblings Bryan Ririe, Brad Ririe, Patty Tucker and Char Mitchel. Larry is preceded in death by his father Ken Ririe, mother Beverly Robbins, sister Teresa, son Troy, and grandson Liam. Services will be held at Goff Mortuary, 8090 S. State St. in Midvale, Utah at 11:00 am on Wednesday, March 30th. Following the services Larry will be interred at Larkin Sunset Gardens in Sandy.

Larry James Ririe passed away at the age of 68, due to a heart attack at his home in Logan, Utah on Wednesday, March 23. He was with his wife Celece when he passed and was comforted in his final moments. Larry was born in Tooele, Utah on December... View Obituary & Service Information

The family of Larry James Ririe created this Life Tributes page to make it easy to share your memories.

Larry James Ririe passed away at the age of 68, due to a heart...

Send flowers to the Ririe family.