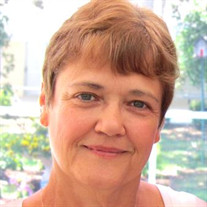 Linda Carol Novak, 73, passed away June 10, 2022, after her fight with Alzheimer’s Disease at Pheasant Run Memory Care Facility in South Jordan, Utah. Linda is survived by her husband Gary, son William and daughter-in-law Kayla, daughter Laura and son-in-law Eric, stepson Gary Scott and daughter-in-law Holly, along with 9 grandchildren. She was a member of the Church of Jesus Christ of Latter-day Saints. Services will be held on Thursday, June 16, 2022, at 11 am at the Church of Jesus Christ of Latter-day Saints meetinghouse at 8485 S 1000 E in Sandy, UT with a viewing 90 minutes prior to the service. Interment will be at the Utah Veterans Cemetery & Memorial Park in Bluffdale, UT. Funeral services will be broadcasted and can be viewed at http://mywebcast.churchofjesuschrist.org/SandyUtahHillcrestStake and clicking the blue button next to “Linda Novak Funeral Service.” In lieu of flowers, the family has asked that a similar donation be made to the Alzheimer’s Association to help fight against this disease. Go to www.alz.org/ and click the Donate button in the upper right of their page. Linda was born on April 23, 1949, in Peru, Indiana to her parents Howard J. and Ruth June Richardson. She graduated from Peru High School and attended 3 years at Indiana University School of Nursing before meeting Gary Walter Novak and getting married on September 3, 1976, in Peru, Indiana. In 1978 they moved to Shelton, Connecticut where they raised their 2 children Bill and Laura. In 2007 Gary and Linda retired and moved to Spring Hill, Florida where they began their “13-year vacation,” spending time with grandchildren, and being caregivers to both of their mothers. In May 2021, with her health declining and needing more help, Gary and Linda moved to Sandy, Utah to live with their son Bill, daughter-in-law Kayla, and their children. On January 10, 2022, Linda entered the Pheasant Run Memory Care Facility in South Jordan, Utah with her condition declining rapidly. She passed away 6 months to the day after entering Pheasant Run at 6 pm on June 10, 2022. . . .

The family of Linda Carol Novak created this Life Tributes page to make it easy to share your memories.

Send flowers to the Novak family.