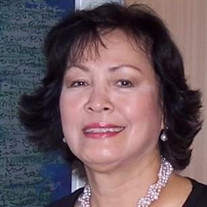 Lucinda (Lucy) Aban Hakanson passed away peacefully March 21, 2022 in Las Vegas, NV at the age of 83. She died of complications related to covid pneumonia. Lucy was in and out of the hospital from November 2021 until she passed away. She was survived by her loving husband, Dallas Hakanson, and Dallas’ 5 children, and 19 grandchildren. Lucy was a member of The Church of Jesus Christ of Latter-day Saints. Dallas and Lucy’s marriage was solemnized in the Las Vegas Temple for time and all eternity. Lucy was born June 30, 1938 in San Juan, La Union, Philippines. As a child during World War II, her village was protected by US Troops camped on the beach near her home. She remembered the troops giving out candy and gum as a peaceful gesture. She graduated college in Manila Philippines and later married Leonardo Costa. Lucy began her career with Philippine Airlines as a secretary to the president. She also worked for Hughes AirWest and finished her career at Japan Airlines, retiring in 1991. During her career, she traveled the world and enjoyed many experiences. After retiring, she lived in San Francisco, Los Angeles, and Las Vegas, where she met and married her husband, Dallas Hakanson, in 2004. Dallas and Lucy were married for 17 years. They owned homes in Las Vegas and in Lucy’s hometown of San Juan, Philippines. They were happy together and loved each other. Dallas and Lucy worked together at local Las Vegas conventions and ushered at local Las Vegas sporting events and shows. She especially enjoyed ushering for the Las Vegas Golden Knights Hockey games for the last 5 years because of her love for the team. She was preceded in death by her parents, Pedro and Julia Aban, her two brothers, Cesar and Sonny Aban, and a great-grandchild. She is also survived by her sister, Cristina Ladia, and her two brothers, Benjamin Aban and Cielito Aban. All lived or are currently living in the Philippines. A viewing will be held at Goff Mortuary (8090 S. State St., Midvale, UT 84047) on Tuesday, March 29, 2022 at 10 am. Graveside services and burial will follow at 11:30 am at the South Jordan Cemetery (10630 S. 1055 W., South Jordan, UT 84095). A memorial service will be held in Las Vegas on April 9, 2022 at 11 am at The Red Point Ward building of The Church of Jesus Christ of Latter-day Saints (9011 Hillpointe Road, Las Vegas, NV 89134). All friends of Lucy and Dallas are invited.

Lucinda (Lucy) Aban Hakanson passed away peacefully March 21, 2022 in Las Vegas, NV at the age of 83. She died of complications related to covid pneumonia. Lucy was in and out of the hospital from November 2021 until she passed away. She was... View Obituary & Service Information

The family of Lucy (Aban) Hakanson created this Life Tributes page to make it easy to share your memories.

Send flowers to the Hakanson family.