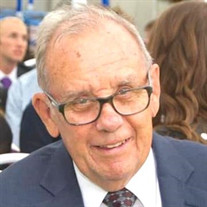 Max Spencer Osborn (MSGT USAF RET) was born March 7, 1932, in Delta, Utah to Frank Lorin Osborn, Jr. and Mildred Reveau Black Osborn. He always had fond memories of growing up in the small towns of central and southern Utah, especially Eureka and Beaver. He passed away at his home in Sandy, Utah, on the beautiful sunny morning of April 6, 2022, with his family by his side. While helping his father he met the love of his life, his eternal companion, Gayle Marie Platt. They married on March 16, 1957, in Salt Lake City, Utah, later solemnized in the Salt Lake Temple. They were married for 53 years at the time of her passing. Max was an active member of the Church of Jesus Christ of Latter-day Saints and served willingly and successfully in several church positions including his favorite calling as an Ordinance Worker in the Jordan River Temple. The family that Max and Gayle created was his most cherished creation. He was very proud of his children, grandchildren, and great-grandchildren and went to as many of their special events as he could. Max always had a story to tell about his family to anyone who wanted to listen. He looked forward to the family Christmas Eve party and Christmas breakfast where he could talk to and hug almost every member of his large family. Max is survived by his sons and daughters: Saundra Kay Baker (Jeff), Timothy Spencer (Gail), Jeanna Marie Whipple (Ken), Michelle Reveau Keller (Jeff), Lorena Diane Osborn, John Lorin, Terrance Edward (Christy), Stacey Ann Day (Joseph), 27 grandchildren and 27 great-grandchildren. Also survived by his brother, Doug Osborn (Janet), and sister, Lora Short (Jim). Preceded in death by his wife, his daughter Debra Lynn, grandson Christopher Sean, parents, and siblings, Wilma Lubbers and Richard Osborn. We, as a family, would like to recognize our brother, John, and tell him that we have so much gratitude in our hearts for his excellent care of our father 24/7 for the last 12 years. There’s not enough words in the English language to properly thank you for everything you did for Dad since Mom’s passing. You were an incredible caregiver and Dad’s best friend. The family expresses their appreciation to CNS Hospice and to Janessa, Dad’s nurse, for the loving support and care. A viewing will be held on Sunday, April 10, 2022 from 6 to 8 p.m. at Goff Mortuary, 8090 S State Street, Midvale, Utah. Funeral services will be held Monday, April 11, 2022, at 11 a.m. with a viewing starting an hour before at the Sandy Utah West Stake Center, 8680 S 220 E, Sandy, Utah. Interment will immediately follow the funeral at Lake Hills Cemetery, 10055 South State St. The service will be livestreamed on the Goff Mortuary Facebook Page at the following link: https://www.facebook.com/pages/category/Funeral-Service---Cemetery/Goff-Mortuary-116988261695382/ (The livestream video will appear when the service starts.)

The family of Max S. Osborn - MSGT USAF RET created this Life Tributes page to make it easy to share your memories.