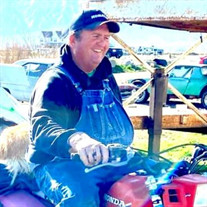 Michael (Mike) Woolsey, 52, was taken from his earthly life suddenly while making vehicle repairs. Mike was doing what he did best, helping others, be it family, friends or strangers. Mike was born to Lars Mahlon and Phyllis Colleen Woolsey on August 22, 1969 in Provo, Utah. He was the youngest boy and 9th child of 10. He attended school in Provo through his junior year of high school, and then moved to Mesa, Arizona during his senior year of high school. Mike was more interested in having fun, and living life to its fullest, although he didn’t graduate from high school, he later went on and earned his GED. Mike served a mission for The Church of Jesus Christ of Latter-day Saints serving in Charleston, West Virginia. He spent 18 of the 24 months on the mission’s car crew - traveling to zone conferences to change oil, brakes, and other maintenance on the mission vehicles. After returning from his mission, he was set up on a blind date that led to his marriage to his eternal sweetheart, Ramona Linton on January 8, 1993 in the Manti LDS Temple. They resided in Arizona for a few months, before returning to Utah where they now reside. They were blessed with two children, Collette and Adam, who he loved, adored and would drop anything to help them. Mike is survived by his wife Ramona (Mona) of Benjamin, UT; daughter Collette (Stettson) Deeter of La Sal; son Adam (Brinlee) of Vernal, his siblings Lars (Maren) of Hinkley; LeeAnn of Mt. Pleasant; Duane (Kristina) of Salt Lake City; Dale (Cathy) of Salem; Johnny (Sherraine) of Beechgrove, TN; Ronnie (Shana) of Payson; Kay Beth (Jorge) of Santaquin; and Lita Jo of Delta, and numerous other in-laws, nieces, nephews, cousins, aunts, uncles and friends. He was preceded in death by his parents, and sister Lisa, and his beloved horse Crunch. Funeral services will be Saturday May 14, 2022 at 11:00 am at the Spanish Fork West Stake Center, 575 West 400 North, Spanish Fork, Utah. Viewings will be held at the same location on Friday, May 13, 6:00 - 8:00 pm and Saturday, May 14, 9:30 - 10:45 am. In honor of Mike and the things he loved, the family is asking if you have older running vehicles, race cars, or rock crawlers to drive them in the procession. Services are under the direction of Anderson Funeral Home in Nephi.

Michael (Mike) Woolsey, 52, was taken from his earthly life suddenly while making vehicle repairs. Mike was doing what he did best, helping others, be it family, friends or strangers. Mike was born to Lars Mahlon and Phyllis Colleen Woolsey... View Obituary & Service Information

The family of Michael (Mike) Woolsey created this Life Tributes page to make it easy to share your memories.

Michael (Mike) Woolsey, 52, was taken from his earthly life suddenly...

Send flowers to the Woolsey family.