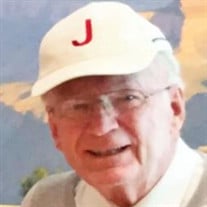 Dr. Nelson Lunt Jones (Doc), 81, passed away peacefully in his sleep on March 17, 2022. He was born to Preston Lunt Jones and Helen Chloe Bailey Jones on September 20, 1940 in Nephi, UT. In his youth he enjoyed hunting, fishing, traveling, and working on the farm with his older siblings Jenny and Howard. He graduated from Juab High School in 1958 and served a Church mission to Germany. Upon his return, he enrolled at the U of U and then BYU where he met his eternal companion, Lucy Jo Harwood. They were sealed in the Manti Temple on June 26, 1964. They moved to Seattle where Nelson graduated from the University of Washington with a Doctor of Dental Surgery degree. He served as a Captain in the U.S. Army in Vicenza, Italy, from 1968 to 1971. Following his honorable discharge from military service, he and Lucy made their home in Nephi where he carried on his father’s dental practice and they raised their 5 children. He truly enjoyed his profession—practicing dentistry for over 45 years. Doc was generous with his time and resources. He served in the Kiwanis Club, Dental Golf Association, Canyon Hills Men’s Association, and as a golf coach at Juab High School for many years, where he taught and influenced countless youth. He was a voracious reader and history buff with a photographic memory. He enjoyed travel and adventure, knew multiple languages, and was the ultimate tour guide on family vacations. He never met a stranger and will long be remembered for his witty sense of humor. Doc was an avid sports enthusiast and enjoyed both participating in and watching his kids and grandkids compete in athletics. He also supported their artistic talents in attending many recitals and performances. He was proud of his heritage and often shared stories about his ancestors. Gathering with his family was the greatest joy of his life. He also loved to be out on the course with his golf buddies, who were his second family. He and Lucy retired to and enjoyed living in St. George for the past few years, and keeping in touch with life-long friends was very meaningful to him. His grandkids will treasure memories of Easter egg hunts in the West Fields, lawnmower rides, the boom-boom machine, trips to the golf course, and Grampy cakes for breakfast. A life-long member of The Church of Jesus Christ of Latter-Day Saints, he had a firm testimony of our Savior, and loved teaching the Gospel. Doc is survived by his wife, Lucy, and children: Rodney (Jamie) of Monument, CO; Sheralyn (Les) Brown of Provo, UT; Curtis (Angi) of Draper, UT; Elaine (Conley) Moon of Duchesne, UT; Preston (Jenya) of Orem, UT; 18 grandchildren, eight great-grandchildren, sister-in-law Pat; and his beloved cat Marley. He was preceded in death by his parents and siblings, and brothers-in-law Dick Frederick and Angus Belliston. Funeral services will be held on Saturday, March 26th at 11 am at the Nephi Stake Center, 351 N. 100 W. Viewings will be held on Friday, March 25th from 6-8 pm at the Anderson Funeral Home, 94 W. 300 N., Nephi, and prior to the services on Saturday from 9:30-10:45 am at the Stake Center. Doc will be interred at Vine Bluff Cemetery with military honors provided by American Legion Post #1. The family would like to thank Brace, Kay, and Jolene at Anderson Funeral Home, Bishop Nielson and the Nephi 6th Ward Relief Society for their compassionate service, and the many friends and neighbors, who have influenced and supported our family throughout the years. We hope the greens are rolling fast in Heaven Dad! Keep Smiling! The funeral services will be live-streamed on Zoom at: https://zoom.us/j/98952242966?pwd=UER0cEg0RXExMFVuQXVUSEJueGg1QT09 Meeting ID: 989 5224 2966 Passcode: 823754

Dr. Nelson Lunt Jones (Doc), 81, passed away peacefully in his sleep on March 17, 2022. He was born to Preston Lunt Jones and Helen Chloe Bailey Jones on September 20, 1940 in Nephi, UT. In his youth he enjoyed hunting, fishing, traveling,... View Obituary & Service Information

The family of Dr. Nelson Lunt Jones (Doc) created this Life Tributes page to make it easy to share your memories.

Send flowers to the Jones family.