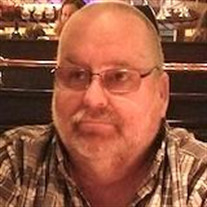 Our loving husband, father, grandfather and friend Sheldon James Oakeson peacefully passed in the early morning hours on June 11th, 2022. He was born on June 28th, 1962 to Leonard and Doris (Hebdon) Oakeson. He was raised in South Jordan, Utah and lived on the same street as several of his aunts and uncles. He attended the old Bingham High School and graduated in 1980. During his time there he wrestled, played football and was on the yearbook committee. He talked fondly of his high school friends Ted, Troy and Darwin and all the good times they had together. He met Vicki (wife) in the 90’s and every time he would go to her house she would sneak out the back door before he found her. This went on for quite awhile until he got smart and decided to park along the end of the driveway so she couldn’t pull the car out. They got married August 7th, 1996 in West Jordan, Utah. They moved to Herriman, Utah within a few years to start a family of their own. He acquired a large Budweiser stein collection from her and got a new one every year for Christmas from her or one of the kids. When they moved into the Herriman neighborhood they met Ken and his family. They become friends and he would always call Ken and say “Kenny do you want to come out and play?” He had several jobs including St. Marks Hospital, Union Pacific Railroad, Sandy City Police Department, Stock Building Supply and Smith’s in the produce department up until he quit working. He grew to love his produce coworkers, especially Ricco and Compton. They continued a friendship and he would visit them at the store often. He is survived by his wife Vicki, daughter Rebekah (Bradley), son RJ (Ashlyn), mother in law Vicki, brother Rallo (Donna), brother Vance (Judy) and step children Angie (Chris), Wayne (Tiffani), Alan (Becky), Nick (Kalli) and Les (Heather), as well as his grandchildren Tavis, Jaucalyn, Hunter, Khloe, Ayva, Wayne Jr, Olivia, Evalynn, Ayva, Branson, Lacie, Brylee, Kayson, Trey and Tanner. He is preceded in death by his mother and father, brothers Richard and Morris and several aunts and uncles. We would like to thank IMC and University hospitals and extend a special thanks to Dana at Utah Valley Specialty Hospital. Liberty Dialysis and Fresenius Kidney Care were also very involved over the last several years. He considered his nurse, Karen, a friend. A viewing will be held on Friday, June 17th, 2022 at Anderson and Goff Mortuary (11859 S 700 E, Draper, UT 84020) from 10-11:45 AM with a funeral service starting at 12 PM. Burial service will follow at the South Jordan Cemetery (10630 S 1055 W, South Jordan, UT 84095). For those that can’t attend but would like to, the funeral service will be streamed on the Anderson and Goff Mortuary Facebook page starting at 11:55 am.

Our loving husband, father, grandfather and friend Sheldon James Oakeson peacefully passed in the early morning hours on June 11th, 2022. He was born on June 28th, 1962 to Leonard and Doris (Hebdon) Oakeson. He was raised in South Jordan, Utah... View Obituary & Service Information

The family of Sheldon James Oakeson created this Life Tributes page to make it easy to share your memories.

Send flowers to the Oakeson family.