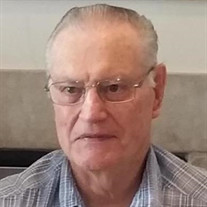 Sherwin Clifford Bair joined his eternal companion on the morning of 31 May 2022. He was born 5 Apr 1927 in Smithfield, Utah to Clifford Bair and Violet Read. Violet had gone to Smithfield to visit her family when Sherwin decided to make his debut. He was the second of 9 children of which 3 died in infancy and 2 as young children. Sherwin worked alongside his father on the farm and then, as he got older, in the blacksmith shop. It was in the blacksmith shop he learned the skills he would use to support his family of 10. On 18 Apr 1945 Sherwin enlisted in the United States Navy while still in high school. He was stationed at Shoemaker, California (near San Diego). He and the Commandant had a friendship and respect for each other. He served as his personal driver for the majority of his military time. His Navy service never extended to the water yet he faithfully served in all his responsibilities and was discharged 1 Aug 1946. Shortly thereafter he met Marian Hurst on the campus of Utah State University. They were married in the Logan, Utah Temple on 15 Jul 1947. She preceded him in death on 26 Feb 2017 giving them 70 years of marriage together. Sherwin was employed by Sego Milk as a line worker, Thiokol Trackmaster as field service representative and Utah State University as technical services director. In addition he owned and operated an electronic repair shop on Main Street in Richmond for a short period of time. Many of his children and friends had wood burning stoves made by his own hands. He was always a hard working man. He loved the challenges and patience required to deer hunt with both a rifle and bow and arrow. His favorite was the bow. His hunting provided food for his family, friendships and a legacy well known on the mountain. Sherwin and Marian raised 8 children in Richmond. Utah. Several years after retirement they sold the family home and moved to Hesperia, California to be closer to their middle son, Rex and family. As Marian’s health deteriorated they moved to Lake Forest, California with their youngest daughter Ruth and family. When they moved to Utah Sherwin and Marian moved to the Kamas Valley and in the home of their youngest son Phillip and his family. Sherwin loved being in Oakley, Utah where he watched the wildlife in the fields. He is survived by his 8 children: Catherine (Ken) Walston, Arizona; Alanilee (Colin) Jenkins, Montana; Joy (Gary) Stone, Arizona; Ann (Dave) Downs, California; Ruth (Randy) Bindrup, Utah; David Bair, Arizona; Rex (Amy) Bair, California; and Phillip (Kristie) Bair, Utah; 32 grandchildren and 26 spouses, 77 great grandchildren with one arriving this fall, and 1 great great grandchild. The Bair family patriarch has passed the title onto the next generation. Graveside services will be held at the Francis Cemetery in Francis, Utah at 11:00 a.m. Friday, 3 Jun 2022. He will be laid to rest next to his sweetheart. In lieu of flowers please donate to the charity of your choice in his honor. So dad.... What is mom doing? . . .

Sherwin Clifford Bair joined his eternal companion on the morning of 31 May 2022. He was born 5 Apr 1927 in Smithfield, Utah to Clifford Bair and Violet Read. Violet had gone to Smithfield to visit her family when Sherwin decided to make his... View Obituary & Service Information

The family of Sherwin Clifford Bair created this Life Tributes page to make it easy to share your memories.

Sherwin Clifford Bair joined his eternal companion on the morning...

Send flowers to the Bair family.