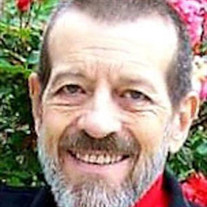 My dad, Steven Frank Winget, passed away suddenly on February 26, 2022. Since then, I have struggled to write a fitting obituary for his complicated, solitary life. Dad was born to Frank and Maxine Winget on May 28, 1951. During his life, he married my mom, Jan Peacock, and they had two children together, Liza and Jeff. Liza and her husband Mike Roberts have three children—Braydon, Quentin, and Elizabeth. My wife Shanda and I have 5 children—Lydia, Steven, Molly, Owen, and William. Dad loved the times that he spent with his family, but he mostly preferred his solitude and privacy, especially later in his life. While married to my mom, Dad worked as a custodian at Castle Dale Elementary, and he instilled in us a love of the outdoors. My sister and I fondly remember hiking up into Winks Canyon with him often and sharing Campbell’s soup cooked in the can. Dad was a loving and attentive father during those early years, and I will always remember him for the love that he felt and showed. During that time, he also taught me chess and clobbered me over the board for years. As an adult, I finally surpassed his ability, but my love of chess will always bring back memories of hours spent in silence with him, calculating every last tactic. When Liza and I were in middle school, dad married Linda Waters, and the two of them embraced spending time with us and forging better relationships with us. We fondly remember a road trip to Disneyland, singing Doobie Brothers songs the whole way and weekends spent in their home in the mountains of Brookside, Utah. In 1998, Dad and Linda divorced, and he moved in with his parents to help them as they got older. He often expressed to me that his parents helped him more than he helped them, giving him love and support in a dark time in his life. After Grandpa passed away in 2001, he took great care of my grandma. They were so close, and she looked after him mentally and emotionally while he took care of her physical needs as she aged. Grandma’s death in 2008 ushered in a dark time for my dad. Grandma had grounded him in a lot of ways, and without her, the mental health issues that he had had for most of his life intensified. It’s hard for me to write about this time because I didn’t see him much after that, and he pulled away into increasing solitude. However, there are even some memories during this time. The time he spent with his grandchildren allowed him to show his warmth, love, and compassion to them like he had shown to us when we were young, and there were a few long chess games thrown in there as well. However, the last years of my dad’s life were lonely. He lived most of them in his little apartment downtown, which gave him a place and a purpose. He spent many hours at the library and reading, which is another love he passed down to us and to our children. We will be having a celebration of life for my dad on his birthday, May 28th at South Jordan Cemetery. In lieu of flowers, we ask that donations be made in my dad’s name to NAMI Utah to further their work in helping people who suffer from mental illness. Anyone wishing to attend the service can email me at [email protected] for the details. Sincerely, Jeff Winget

My dad, Steven Frank Winget, passed away suddenly on February 26, 2022. Since then, I have struggled to write a fitting obituary for his complicated, solitary life. Dad was born to Frank and Maxine Winget on May 28, 1951. During his life,... View Obituary & Service Information

The family of Steven Frank Winget created this Life Tributes page to make it easy to share your memories.

My dad, Steven Frank Winget, passed away suddenly on February...

Send flowers to the Winget family.