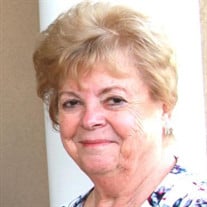 Vivienne Kae Talbot Smith, devoted wife, mother, grandmother and great grandmother returned to her Heavenly Father at the age of 84 on Sunday, June 5, 2022, of complications due to Alzheimer’s. She was born July 22, 1937 in the Cottonwood Maternity Hospital, in Murray, Utah, to Charles Ronald and Vivian Gertrude Boothe Talbot. She spent her youth in their beloved home on 6th Avenue in Midvale, UT. While attending Jordan High School she met and married her high school sweetheart Merlin James Smith on February 9, 1954. They were later sealed in the Salt Lake City Temple on May 24, 1956. After beginning their family in Midvale, they moved to Alamogordo, NM and St. David, AZ during the first 8 years of their marriage. In 1966 they settled in San Diego where they have lived for the past 56 years. Kae loved education and was a life-long learner. After having 6 children she went back to school and received her GED, and an Associate degree from Mesa College. She then attended San Diego State College for 2 more years to receive her Bachelors degree. Not stopping there, she continued on to receive 2 Masters degrees. She had enough credits for a PHD and was only lacking the dissertation. She continued her career in Special Education and Speech Pathology. Kae was a dedicated teacher and worked for the La Mesa-Spring Valley School District for 32 years. She cared for her students and wanted the very best for them. Several returned to thank her for the skills and knowledge they received from her. Kae was an active member of The Church of Jesus Christ of Latter-day Saints. She served in each of the auxiliaries throughout her life. She also loved serving as a temple worker in the San Diego Temple for many years. Another love in Kae’s life were animals, especially of late beautiful Bohdi and dear little Penny, who has been her constant companion these last 2 years. Kae is preceded in death by her parents Ronald and Vivian Talbot, younger brother William, and daughter Debra Kay Manning. Kae is survived by her husband, Merlin James Smith and her children Roger Manning (son-in-law), Kevin (Margaret) Smith, Julie (Gary) Murray, Allen (Tracey) Smith, Kory (Tammy) Smith, and Scott (Maria) Smith. She adored her 23 grandchildren (and spouses) and her 60 great grandchildren. Funeral services will be held on Thursday, June 9, 2022 at 11:00 AM at Anderson & Goff Mortuary, 11859 South 700 East, Draper, UT. A viewing will be held earlier from 9:30-10:45 AM at the same location. Interment will be at the Draper Cemetery. Special thanks to Anderson & Goff Mortuary for their loving care and support in providing these services. Streaming the funeral service is available at: https://m.facebook.com/pages/category/Funeral-Service---Cemetery/Anderson-Goff-Mortuary-293949407707203/

Vivienne Kae Talbot Smith, devoted wife, mother, grandmother and great grandmother returned to her Heavenly Father at the age of 84 on Sunday, June 5, 2022, of complications due to Alzheimer&#8217;s. She was born July 22, 1937 in the Cottonwood... View Obituary & Service Information

The family of Vivienne Kae Talbot Smith created this Life Tributes page to make it easy to share your memories.

Send flowers to the Smith family.