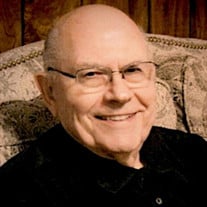 William James Brady, known as "Bill" to his family and friends, age 86, of the Creve Coeur area of St. Louis County, Missouri, passed from this life on Saturday, June 4, 2022. He was born on Saturday, July 20, 1935 in Eureka, Utah, one of two sons born to Lindsay Webster Brady and Margaret Helen (nee Laird) Brady. He was married to Sherry Hanson on October 11, 1957 in Salt Lake City, Utah. They were blessed with 58 years together, two daughters and four grandchildren. Bill began working in the mines during high school, the same as several generations of his family before him did. After graduation, he continued working in the mines while earning a Bachelor’s degree in Mining Engineering from the University of Utah. He continued working in the mining industry, creating his own company, Brady’s Mining and Construction Supply Company. During his 63 year career, he developed many new drill bits and mining machinery that helped with creating faster and safer drilling conditions. He received 47 patents for his inventions. In his spare time, Bill was an avid card player and gardener. He ended up on the winning side of most gin hands, and grew record tomato harvests. Bill was preceded in death by his parents; and wife, Sherry. He is survived by two daughters, Dianne (Stephen) Sperry of Las Vegas, Nevada, and Patricia (Ben) Britten of Park City, Utah; four grandchildren, Cassandra, Stephen, Nikki and Brady, and their spouses; brother, Ted Dean Brady; nieces, nephews, cousins and friends. There will be a visitation at Shepard Funeral Chapel, 9255 Natural Bridge Road at I-170, St. Louis, Missouri (314-426-6000) on Friday, June 10 from 5:00 until 7:00 p.m. Funeral services will be held on Saturday, June 18, 2022 at 11:00 am (with a viewing from 10–10:45 am) at the Nephi North Stake Center, 1125 North 400 East in Nephi, Utah. Interment, Nephi Vine Bluff Cemetery. In lieu of flowers, Bill’s family suggests donations in his memory to the Kidney Cancer Association, P.O. Box 676226, Dallas, TX 75267-6226 or call 1-800-850-9132. . . .

William James Brady, known as "Bill" to his family and friends, age 86, of the Creve Coeur area of St. Louis County, Missouri, passed from this life on Saturday, June 4, 2022. He was born on Saturday, July 20, 1935 in Eureka, Utah, one of two... View Obituary & Service Information

The family of William James Brady created this Life Tributes page to make it easy to share your memories.

William James Brady, known as &quot;Bill&quot; to his family and friends,...

Send flowers to the Brady family.